Towards a shared vision of sustainability for research and e-infrastructures 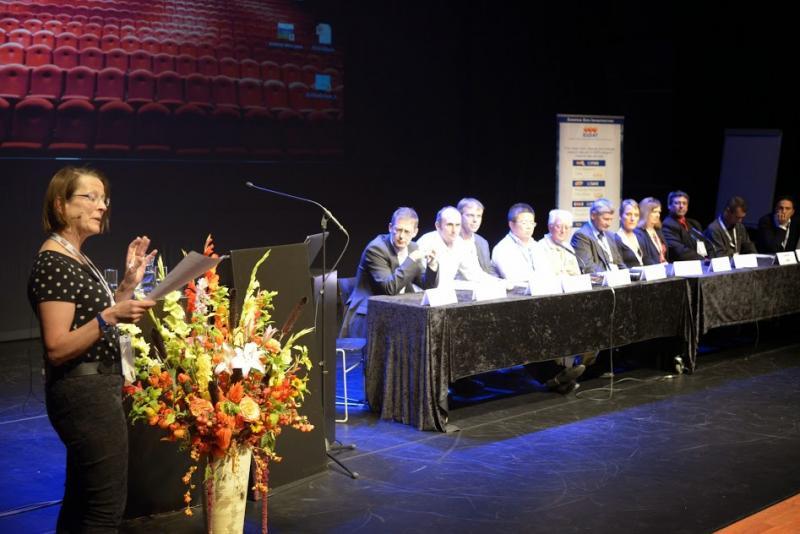 Sustainability – having the resources and the policy framework to deliver services and support users into the future – is at the heart of EUDAT’s mission of designing, implementing and offering common data services and infrastructure for research.

Future proofing is a key issue for all of Europe’s research infrastructures and e-infrastructures. A plenary session on sustainability at EUDAT’s Third Conference in Amsterdam on 24 – 25 September 2014, brought together experts from across Europe to discuss and debate what sustainability should encompass and how it can be achieved.

BioMedBridges is another ambitious collaborative project, in which 12 biomedical sciences research infrastructures covering fields stretching from biobanks and clinical trials to mouse models and contagious agents, are working to build shared e-infrastructure to allow data integration. This will underpin future sustainability and also preserve the value that is inherent in the data, by allowing for its re-use, combination and analysis in many different contexts, now and in the future.
As Stephanie Suhr of the European Bioinformatics Institute and Project Manager of BioMedBridges noted, “sustainability embraces political, social, technical and financial, elements, and in the case of sensitive or personally identifiable data, such as in biomedical research or social sciences, also legal and ethical requirements. Data sharing must be achieved in the face of the explosive growth of life sciences data and the increasing cost of storage. It is also necessary to accommodate the fact that generation of a large part of biomedical data, for example of medical images, will be increasingly widely dispersed as imaging technology develops and more sophisticated machines become available for example at hospitals. Necessary expertise to curate the data may not be available locally while the transfer speed can be many times lower than the speed with which the data is generated, making connectivity and network capacity a further bottleneck,” Suhr said.

The explosion in the data generation capacity of scientific equipment and sensors is creating a new class of researchers who make different demands in terms of their use of computing power and of how and where their data is stored, said Alison Kennedy, Executive director of the Edinburgh Parallel Computing Centre, who is also a board member of PRACE and EUDAT. “Traditionally users needed us to develop tools to generate data – for modelling and simulations, which had to be kept to compare with other models. Now we have a completely different set of users who want to analyse data generated elsewhere,” Kennedy said. These users tend not to have such a strong background in computing and Kennedy said it is really important to understand their requirements, in particular, how the data will be used, preserved and stored over the longer horizon.

In his role in business development in Dante and GÉANT, Roberto Sabatino works with international scientific users to help them utilise the scientific computing infrastructure of GÉANT – currently connecting over 50 million users at 10,000 institutions across Europe at speeds of up to 500Gps - to its full potential. Sabatino agreed that the rise of big data is changing the practice of research and creating a new type of user with different requirements. Given this, ensuring the sustainability of research data into the future requires greater interchange between e-infrastructures and research infrastructures. “We need stronger cooperation between the infrastructures to understand users’ needs,” Sabatino said.
While the e-Infrastructures need to respond to their users, users also need help and advice on what data to store and how, believes Yannick Legré, director of the European Grid Infrastructure, which provides computing and data services to support the single European Research Area. “We have to work with and support users and scientists, to inform and define with them what data to store, what needs to be made sustainable, and agree on what can be reproduced,” Legré said. This points to another aspect of sustainability, which is improving the energy efficiency of computing systems and reducing their environmental impact. “We must be sustainable in terms of energy use. We are trying in computation to move the processing power to the data set, rather than moving the data to the processor,” Legré said.
It’s clear that whatever technical, policy and organisational elements must be factored in, the core of sustainability is trust. The whole of research is in a time of flux, in which computing is changing the practice of science and re-writing the scientific method. Many of these issues are exemplified in the OpenAIRE and OpenAIREplus projects, which underpin the move to Open Access to all scientific data generated by the European Union’s publicly-funded research programmes. Paolo Manghi of ISTI CNR and OpenAIRE said OpenAIRE is moving on from the pilot phase to providing a service for researchers to deposit Framework Programme 7 and ERA funded research in Open Access Repositories. “We’ve got to convince researchers there is a need to interlink information,” he said. While the traditional system for scientific publication has well-known and well-oiled work flows, the same is not true for data sets, which differ from one discipline to another. For Open Access to be sustainable, “We should develop ways to interrogate whatever data is generated,” Manghi said. This must apply both to the initial use of data, but also to allowing data to be re-used in the future. People collecting data know what they want it for. To re-use data it is necessary to understand this context.

The overall message from the panel was clear: current levels of generation and storage of data is unsustainable. To plot the path to a sustainable future requires a cooperative effort across Europe’s research infrastructures and e-infrastructures. It is critical not to re-invent the wheel – some answers are out there already point the way towards a sustainable future in which researchers are smarter at generating data and more selective in storing it.