The curent B2STAGE implementations are only limited to files managed by the EUDAT B2SAFE service.

Modern Big Data computing involves a large amount of data. When many HPC centers are involved, data exchange to/from one center must be taken into account. Another scenario for data movement is when data needs to be moved between different (EUDAT and community) applications or to HPC centres for data processing. In general, data movement arises in order to satisfy at least one of the following needs:

In EUDAT, the key functionality of the B2STAGE gridFTP Service is transferring relevant data sets between HPC centers and EUDAT in order to store them, process them and, possibly, move the results back. Data could also be already stored in one or more EUDAT data centers, as result of the Safe Replication activity. Eventually, output data are identified through a Persistent Identifier (PID).

With the HTTP API EUDAT offers programmatic access to data in B2SAFE and thus allows for smooth integration of such data into other applications and data services. 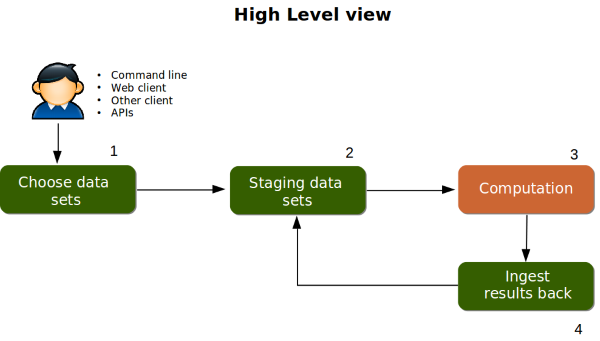 Figure 1 depicts the workflow of B2STAGE gridFTP. In general, it involves the following four steps:

The same workflow holds true for applications relying on data in EUDAT B2SAFE which process the data on behalf of the user. In this case one would employ the HTTP API.

Of course user communities and users in general move data in many different ways outside B2STAGE; B2STAGE addresses, in EUDAT, the problem of how to efficiently move a large amount of data. There are three main aspects to consider for this service:

Several protocols target these aspects, including SCP/SFTP, HPSS and so on. However, these were designed for a LAN context in which latency is not as important as in the WAN context prevalent in EUDAT and tackled by B2STAGE. Furthermore, performance is not the only aspect to be considered: a tool able to transfer large amount of data must be easy to use and highly reliable; moreover, it could offer third-party transfer and the possibility to control/limit the transfer throughput to avoid saturating the network. To meet all these requests, EUDAT supports the following:

Please see below for a comparison between the two. 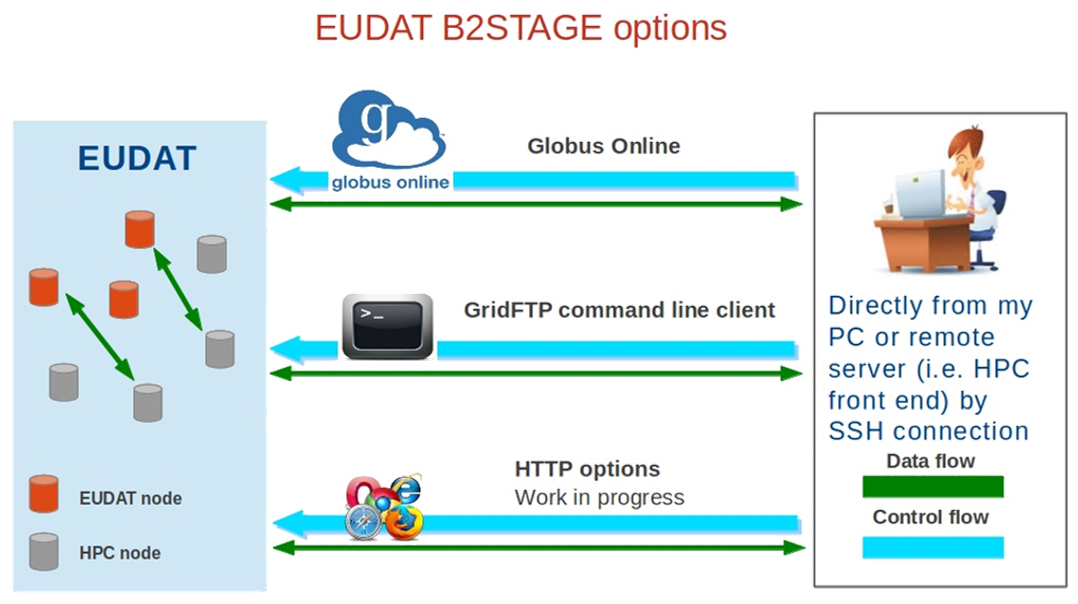 With reference to Figure 2, it is important to observe that B2STAGE gridFTP allows two different flavours of data transfer: third-party transfer, i.e. a transfer between an EUDAT node and a non-EUDAT node (such as an HPC farm) instrumented from the user's PC; and client-server transfer, i.e. a direct transfer between an EUDAT node and the user's PC or, via SSH, the user's login node on an HPC farm. The HTTP method only allows client-server connections; this is a feature of the technology.

Users accessing data in B2SAFE by B2STAGE gridFTP need to have access to a gridFTP client, while for using the HTTP API no special clients are needed, a simple web-browser or curl command line tool suffice.

The B2STAGE service is currently integrated only with the B2SAFE service, and thus couples efficient transfer into EUDAT with persistent identification and Safe Replication. The B2STAGE service integrates GridFTP and HTTP access with the iRODS technology. EUDAT also supports client-side tools to ease the user's B2STAGE GridFTP experience. This is depicted in Figure 3. When data arrive at an EUDAT node to be deposited, the B2SAFE service ensures that a PID is generated by B2HANDLE for each artefact, and this is recorded in the EPIC PID Register. The iRODS Server also handles any replication required for these artefacts, according to the community policies that apply to the user who initiated the transfer. These apply to both third-party (shown on the left of Figure 3) and client-server transfer (shown on the right of Figure 3).

B2STAGE gridFTP plays the role of an interface in front of iRODS to perform high-speed and or large data transfer into EUDAT. The DSI component in Figure 3 was developed for the GridFTP-iRODS communication. DSI was developed in accordance to the GridFTP Data Storage Interface specifications which allow a GridFTP server to be a transfer interface to numerous data storage systems, including iRODS. Persistent identification is handled by the Handle system. The client and the server components of B2STAGE are discussed briefly below, with the emphasis on the client component.

Both flavours of B2STAGE are implemented as server-side extensions (see Figure 3 for B2STAGE gridFTP), i.e. both need to be deployed by or in close collaboration with the system administrator of iRODS/B2SAFE.

The GridFTP data staging functionality of B2STAGE is realized by extending the iRODS system with a GridFTP interface, implemented by the EUDAT DSI Component. This permits the transfer of data through a reliable, high-performance protocol. Information for EUDAT systems administrators to deploy DSI is available from the EUDAT User Documentation site.

The HTTP API consists of several components. The main component is Rapydo which employs an ecosystem of docker containers to install and manage infrastructure components for the HTTP API. Rapydo controls a docker container which runs a Flask server and an nginx server. The Flask server provides the actual implementation of the HTTP API while nginx provides the HTTP server which exposes the API to the users. The Flask framework interacts with B2ACCESS for Authentication and authorisation and B2HANDLE for persistent identifier resolving. Furthermore, it interacts through a python API with iRODS and B2SAFE. Finally, Swagger, a definition of the HTTP API, is used as an HTTP API web frontend which offers a graphical way to explore the HTTP API interactively. Documentation for the server-side deployment of the HTTP functionality of B2STAGE is under development; previews are available the on GitHub.

Any existing client supporting the GridFTP protocol can be employed for B2STAGE, including globus-url-copy, Globus On Line, UberFTP, gTransfer, etc. Among the available clients there is also the EUDAT File Manager which supports a range of transfer protocols (i.e. GridFTP, FTP, native iRODS, etc.) and provides an intuitive and user-friendly interface.

The HTTP API knows two ways of authenticating users 1) via B2ACCESS and 2) via iRODS i.e. users known in the iRODS iCAT database. Both types of users can request an API token and make use of the HTTP API.

There are no special clients needed. Most commands can be issued with the standard curl command line tool or even via the web browser. For better understanding of the HTTP API, the installation comes with a Swagger interface, a graphical representation of the API which also allows to issue some commands.

A practical case for B2STAGE GridFTP

Considering a use case in which a user decides to perform some computation on the data sets he has stored in EUDAT (see step 3 of Figure 1), in short the following steps are necessary:

Of course, in case you need to obtain remote accounts you should refer to the specific guidelines provided by the remote sites (this does not concerns EUDAT directly).

To move on to a practical use-case, consider the case of a user wanting to transfer data into the EUDAT node at the CINECA supercomputing center. Here are the steps to be performed:

At this point you are able to transfer files from/to the CINECA HPC farm (FERMI or PLX) and the EUDAT node in CINECA using Globus Online or equivalent tools such as globus-url-copy. If you also want to transfer data to/from your PC you need to install Globus Connect on it (see here).

EGI has adopted B2STAGE. You can browse their documentation for hints and highlights of their the use and adaptations of the service.

Our B2STAGE presentations discuss how to deploy the service as a data manager, and also how to use it as an end-user.

You can access B2STAGE hands-on training material from our github; note in particular:

Support for B2STAGE is available via the EUDAT ticketing system through the webform.

If you have comments on this page, please submit them though the EUDAT ticketing system.